As technology advances, ideas and inspirations also develop. One ancient practice that has always left a mark in history and has only grown with time is handwriting. Nowadays, there are quite a few different types of pens to write with. However, not many people know about these different types. One example is the fountain pen.

What is a fountain pen? A fountain pen is a handwriting tool, just like any other type of pen. It is specifically used to create unique and certain strokes. The ink is stored inside the shaft and is drawn out by gravity as the hand moves to write. 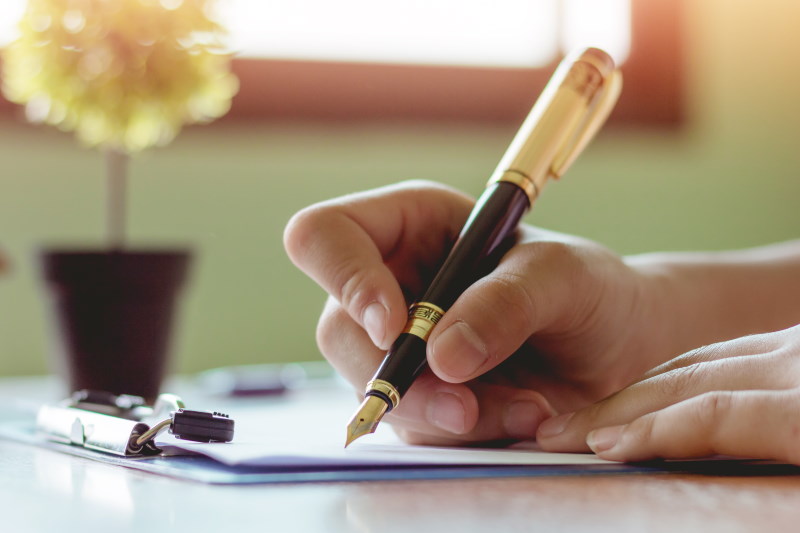 Despite its lack of popularity in society, a fountain pen is a common tool for pen collectors and penmanship individuals. It is also a preferred tool for certain artists due to its unique writing style.

The History of the Fountain Pen

Handwriting, especially during the Middle Age, was once a vital skill to have. If you needed to send a message or record something, you had to have a pen and paper. In fact, not everyone knew how to write back then and the ability to do so was typically available only to royalty or to those with high status.

In today’s world, handwriting is becoming obsolete as there are now many different kinds of electronic devices to make writing easier and much quicker. Although technology is not a bad thing, these effective methods have slowly taken away the art and beauty of handwriting.

The style or design of the pen is very similar to the dip pen. The main difference is that fountain pens have an internal space to store ink, which naturally runs down from the reservoir to the nib (the tip or end of the pen).

Because of this inspired idea, fountain pens were the preferred choice as they didn’t need to be dipped in ink each time you ran out as you had to do with quill and dip pens. This invention made writing much more effective and thus becoming the main source of handwriting tool in its time.

The quill pen, you could say, is an ancient tool used as the only handwriting tool back in the very old days. It is made of a light feather from a wing belonging to a large bird. It is rarely used nowadays as papers are mostly made with harder materials, therefore wearing down the feather stem much quicker.

The quill was the handwriting tool for most countries of the world, of course with some slight variations of the feather in some locations as species of birds can differ in different countries.

There are also other countries that used different materials to write with, such as the reed pen used in ancient Egypt. Reed pens were made of a reed straw or a small bamboo stick. Although they weren’t as lasting as quills, these were the popular choice to write on papyrus.

The dip pen was also introduced in the 19th century, which meant that quill pens were the main handwriting tool for a very, very long time. Its invention pretty much took over the use of quills.

Dip pens were very popular and immediately became a hit as they were made with materials that were more sturdy and durable. These materials came in wood, metal, bone, and even glass. Although they didn’t have an internal space for ink and still needed to be dipped in ink, they lasted twice as long compared to the quill without having to reapply ink.

Finally, the ballpoint pen, also coming into creation in the 1800s. This is pretty much the final stage of the main development of pens. Even to this day, ballpoint pens are found in every place and used in all parts of the globe.

Ballpoint pens are now the most widely used handwriting tool and have been ever since its popularity had risen. The idea came to mind to a certain man when he wanted to write on harder surfaces that fountain pens couldn’t write on, such as wood. As a result, he created a pen, also with an internet ink storage, that contained a tiny metal ball at the tip.

This metal ball method allowed the writer to slide the ink over any hard surface without damaging the tip and while leaving accurate marks. In addition, this prevented the chance for the ink to spill too much, as well as to avoid any ink getting on the fingers. Because of its cleaner effects, it quickly became the go-to pen even when writing on regular paper.

The Art of the Fountain Pen

If you love pens or if you’re a fan of handwriting, then you definitely want to get your hands on a fountain pen. It is a skill that every writer should learn as it does give off a sense of style and a feeling of antiquity. The look of fountain pens even seems like something ancient.

Despite its lack of wide use, the fountain pen is still looked upon as an advance handwriting tool. To those who are not quite big into pens, the fountain pen looks very sophisticated and rightly so as it is mainly used for creative style writing.

Writing with a fountain pen is a great handwriting skill development as the techniques can be a bit more challenging than writing with a ballpoint pen. It requires more of a gentler touch, as well as a more delicate approach.

Overall, the fountain pen was a revolutionary pen. It not only allowed writers to move forward at a faster pace during its age, but it also opened new artistic ways to write. Writing with a fountain pen has now become an expressive way to write, the perfect pen of choice to truly show how you feel about the beauty of handwriting.

Some posts may contain affiliate links. AvalonPens.com is a participant in the Amazon Services LLC Associates Program, an affiliate advertising program designed to provide a means for sites to earn advertising fees by advertising and linking to Amazon.com.